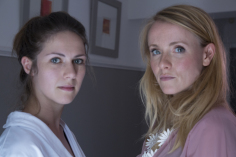 It is Monday April 7th, in the year MMXI.

Cindy Kiss is in a stark, white, empty room somewhere in the WASN building. She is  in an anxious state and is distressed.

Madame Griselda is doing another tarau card reading. It is not clear  who she is doing the reading to, but she is in a vindictive mood.

In the WASN editing room, Tallulah of that Ilk and Suzie Butcher are talking about fragrance, dates, outfits, and semen stains. Suzie was with a young man last night who was both immature and premature. All of the while Laura Dark is busy at her editing console.

Willow Wilkinson is lying on her bed, toying with her laptop, when an incoming call  arrives from Toque. They discuss what happened yesterday, and both agree how special it was for both of them. Willow says that they should meet up, and that she is on her own now. Toque agrees to come straight round.

Clothilda Kitchener walks into the WASN editing room and announces a bonus for the make-up girls who are making a sterling contribution to the viewing figures. She goes on and on as Tallulah and Suzie continue their earlier topic of dresses, admirers, and at cross purposes, the one or the four. Suzie is preoccupied with foursomes and moresomes, as the elemental Tallulah catches sight of Laura working on the footage of the anxious and distressed Cindy that we saw at the beginning of the episode. Laura doesn’t know where the footage has come from, and wonders why it was sent to her. The two make-up girls then quiz Laura about her date last night. It didn’t go well, from the moment she laid eyes and nose on him. Tallulah, however, notices that Laura is wearing the same dress from last night, same it doesn’t appear that she went home. After some ribbing, Laura reveals that she went home with Amabel Grey, and that didn’t go well either.

Madame Griselda does another reading. Once again, we are not sure to whom. The tarau card reader says Esme, but the customer says that she is Rebekkah. It might even be no one, but Madame Griselda appears not to care.

Toque has arrived at Willow’s now, and they are making up for lost time. With passion.

Cindy is walking through the grounds of the TV studio, aware that she is being followed. She sits down in front of an electricity generator, and goes into spasms.

In the WASN editing room, Rosalind Sharp-Wyatt is watching the same footage on Laura’s computer, and Laura walks in surprised. She tells Rosalind that these aren’t the first images that she’s received, and that she suspects that there are secret CCTV cameras dotted around the studio and its environs.

Elissa is on her bed again and talking with Elektra about the lack of likes on her Placebook page. She bemoans the fact that she doesn’t see anyone, and that her mum says it is for her own good. Elektra says that mums are invariably right. Elissa asks Elektra whether she has a mother, and the answer is yes. Elissa asks if Elektra has a father. Elektra says don’t be silly, I’m a voice activated assistant, why would I have a father. Elissa asks Elektra again whether she has a mother. Elektra replies, in a manner of speaking.

Venus and Alice arrive at a new hotel, and book in at reception.

Toque and Willow engage in post-coital pillow talk. Toque asks Willow if she has ever been with a woman before. Willow responds by saying that she has hardly been with anyone before. Toque maintains that they came together through powers unknown, that they met on an astral plane, and that caused them to meet in real life.

Rosalind and Laura’s discussion takes an intimate turn. Rosalind maintains that she likes men, as many as possible, and adds that that was also where she thought Laura’s interest lay. But Laura says sadly that she hasn’t had a lot of luck in that department, and that everyone seems to be looking for just one night stands, whereas she is looking for something more than that.

Elissa asks Elektra about her loneliness. Elektra says that maybe none of this is real. How do any of us know that we exist? Elektra reprises her view that Sarah Constant is an important element to this story, and that person who wrote the story is a magician.

Alice and Venus are in their new hotel room, and by the look of the empty bottles, they are very, very drunk. Alice is distraught and says that it cannot carry on like this, she needs sex and cannot understand why Venus is reluctant. A violent row ensues, during which Alice smashes her wine glass, and pushes Venus causing her to transform into an alien.

It is Tuesday April 8th, un the year MMXI

The next morning, Alice and Venus are sitting in the sauna. Because of her drunkenness, Alice can’t be sure what happened last night, but notwithstanding, she gives Venus an ultimatum - they will go back to the hotel room and have sex. “I don’t want you to stop until I tell you to, and that’s going to be a very long time.”

Continuing their intimacy, Rosalind presses Laura to tell the tale about last night with Amabel. When it all went wrong with the man at The Poacher’s, the man with the eau-de-alone, Amabel inited Laura back to her house, and to stay over. They both ended up in bed together, and started to cuddle. It was nice at first, then they started to do some petting, then Amabel came on a bit strong. Rosalind asks if it was good. Laura replies by saying it was intense, an experience she will never forget. They go on to discuss relationships, and both agree that they are looking for warmth and intimacy. The body language is there, and they kiss, despite Rosalind’s initial reluctance.

Finally, Carol Claxton decides to go to see Madame Griselda. The seer talks about the augury of things to come, and that Carol is in a crossroad in her life. Carol’s mind is racing during the sitting, and she recalls conversations that she had with Lottie, before having an out of body experience. Madame Griselda says that it will turn out alright in the end, adding slyly, especially if Carol starts to attend regular appointments.

It’s probably not a good idea, but Toque decides to bring Willow back to the house to meet the rest of the Sons of Parnassus. Her line of reasoning is probably that this will create some safety from further assaults from Crash Helmet, or even as simple as providing some emotional well-being during the remainder of her time under cover. She introduces them one by one. Neither Ivan nor Tipper think this is a good development. However, Crash Helmet tells them to be more hospitable to Toques’ new girlfriend, arguing that she is a pretty young thing, and might even be persuaded to join the cause.

Venus and Alice have returned to the hotel room, and Venus is pleasuring Alice as Alice intended. As Alice gets more aroused and approaches climax, she shudders and sees Venus once more transformed. This is her last recollection. Venus knew this was going to happen, and cradles her lover’s lifeless form in her arms, knowing that she has lost the most precious thing in her life.