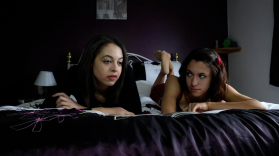 Episode 4      The spirit of the stairwell

It is Saturday April 5th, in the year MMXI.

After the death of Jason Hunter at the HeartThrob nightclub last night, Molloy arrives to find mayhem at the police station. Witnesses are being interviewed amidst the general confusion and Jonathan and Charlie are overseeing events as they unfold. This is the sixty-ninth in the series of deaths at nightclubs and rock concerts, and Molloy and his crew are no nearer to solving any of them.

It’s a big story of course. The disco virus has struck again, and Justin has sent Cindy Kiss to do a live newscast outside the club. A curfew has been announced and things are looking grim for clubbers throughout the region.

Xaviera is watching Cindy on television as Ursula comes in with a mug of something warm. Venus is still missing, and this causes Xaviera great concern.

For some reason, Beth is wearing a wedding dress as she lies on the bed talking to Christopher. There is still no prospect of actually meeting up.

Esme stayed over at Lottie’s last night, and they are seen on Saturday morning talking about mums and guns. Meanwhile Cindy has got back to the studio and decides to give Isabella a call. Isabella is not happy that Cindy is using Hook Buddy for her own amusement, but they reconcile and Cindy decides to give Tariq a call, presumably for a little more amusement as they say round the newsroom.

Madame Griselda, a tarau card reader and seer, gives her sales pitch. There’s something not quite right about her, an other-worldly quality, but she scrubs up well and still has that certain allure.

Xaviera calls a conference with her two trusted lieutenants Ursula and Wanda. Now that the curfew has been announced, nightclubs and rock concerts are out, and the aliens will need to change their operational plans.

Molloy has other things on his mind besides serial killers and arson. Since his sister-in-law, Carol, together with daughter Charlotte, have arrived at the house, there is no peace, same Molloy asks Charlie to take Carol out on a date, even fronting the money for a nice dinner, a nice chat, and maybe a peck on the cheek on the way home. Charlotte is generally always in her bedroom with her friend Esme, same he and Mrs Molloy might get a bit of peace and quiet for a change.

As he does this, Carol and her daughter are at home talking about Hook Buddy. We recall that Carol has just signed up to the site, much to her daughter’s chagrin. Charlotte takes the opportunity of having a go at Cindy Kiss - a slapper in her eyes -  and she fears that her mum is going the same way.

Talking of Cindy, she is now on the television again, giving an overview of the disco virus. Sudden and unaccounted deaths in nightclubs and rock concerts are on the increase, and there was even one death at Cantabrigia Curling Club. As for the curfew, Cindy has no confidence that that is going to happen. Molloy always calls one, and no one seems to take any notice.

Lauren Porter certainly doesn’t, as she talks on the telephone with her friend Cynthia Longfellow about going clubbing on her nineteenth birthday. Lauren is still a virgin, by choice, and Cynthia, who certainly isn’t, by choice, is goading her to let her hair down, same to speak. Lauren is broke but she thinks she can get mum to loan her a nifty.

We finally see all of the Sons of Parnassus together. Crash Helmet, Natasha and Toque are joined by Ivan Ivanov and Tipper Hendry in a discussion about what should be their next move. Natasha wants to hijack an airliner and crash it into the THREE building at Argentoratum. Go out in a blaze of glory. Tipper wants to put up a tent outside the Basilica. However it looks like Crash Helmet is going to have his way, as usual. It looks like another Fried Frog outlet is going to get torched.

Lauren has got her fifty Denarii off mum, so the wonga problem is sorted. Cynthia tells her to bring at least three condoms, but tonight’s not going to be the big night for Lauren as its not a good time of the month.

Lauren’s sister Esme is cuddling her best friend Lottie on the couch at the Molloy’s. They had planned to go to HeartThrob last night but changed their mind at the last minute. Esme has a new boyfriend Luke, and Lottie asks when she is going to see him again. Esme isn’t sure because her and Lottie are getting closer all of the time, but Lottie tells her not to worry. She can still date Luke. “But there’s dating and dating,” says Esme.

Meanwhile Lottie’s mum Carol is in the Molloy’s kitchen when she receives a call from Charlie Dawkins asking her to go out for a Manchurian with him. She has met him before, at a garden party at the Molloy’s last year, and is pleasantly surprised at this new interest. She is in two minds however because Bruce, her last boyfriend and co-incidentally a flic, was abusive to her, and she had vowed never to have a relationship with a policeman again.

Esme and Lottie continue their cuddling as they talk about Holly Baxter who had some brief success as a model in Londinium, not unconnected with the fact that she slept with most of her photographers. Esme states that she too would like to become a model and naively wonders whether she will have to sleep with photographers too. Lottie says that it’s not a problem if they’re female and hot.

The internet bully January Simpson introduces us to her victims -

Lauren Porter, a silly, little virgin girl. “You’re not impressing anyone with your tarty make-up, your short skirts, and your padded bra. The Porters, what did they ever do for Beccleswade, two down and four to go.”

Rebekkah Wood, a Porter too scared to be a Porter. “Why did you change your name bitch? Incest still a big thing in your family?”

Lottie Claxton, Charlotte Claxton, thinks she’s so good looking. “Take your knickers off, and show them your hole. That always works with the boys.”

Esme Porter, who thinks she’s so special. “You can’t even get a shag, not even by Wayne, not even by your cousin Willy.”

Clare Porter, or even the ghost of Clare. “I can’t even say you’d be better off dead, because you are dead, six feet dead.”

January Simpson doesn’t mince her words, does January. What would the keyboard warrior be like if she wasn’t taking any medication.

Beth has finally had enough of Christopher bloody Renshaw. There was so much promise but it all came to nought. Beth is desperately lonely, and wonders if she is ever going to find a soul mate.

Cindy doesn’t have that problem. An eternal supply of avid and venerable lovers queue up for the A list newsreader. She has just launched her own perfume Cindy Kiss by Cindy Kiss - guaranteed success in a bottle.

Rosalind Sharp-Wyatt, promiscuous, promiscuous. “Wonder who’s going to be the lucky Pierre tonight. Check up at the clinic on Monday?”

Sofia Mbewe, chic, not. “One, two, a toke and a screw, Sofia Mbewe, that’s all there is to you, belle milou.”

Isabella Karlin is going to do the Hook Buddy video for another one of those hopeless Beccleswade housewives. This time it’s Trish Baxter, good friend of Carol Claxton, and mother of erstwhile model Holly. Trish is nervous and wears a camisole slip which is slightly more than the site specification. “Are you straight, gay, bisexual, Liberal Democrat?” asks Isabella.

Trish then rings Carol to discuss their experiences with the fragrant newsreader. Carol’s own video profile is now up on the Hook Buddy site. Carol is wearing the required skimpy lingerie, as per the site specification, and makes no bones about what she is looking for from the site. “I like to be wined, dined and fucked, preferably in that order, but I’m open to negotiation.”

Lottie Claxton has invited January Simpson and Sofia Mbewe to join her and Esme for a seance. The plan is to try to contact the souls of Clare and Louise Porter, Esme’s two cousins who died in mysterious circumstances a few years ago. The four girls get started, and Lottie begins the mumbo jumbo. January of all people is frightened as they join hands above the ouija board, and suggests that they go back to watching porn. The others persist however, and then the lights go out, and out of nowhere,  a severed head appears. As the lights go on again, Sofia runs out of the room to the toilet, and January follows her. Esme, mystified, looks at her friend in awe.