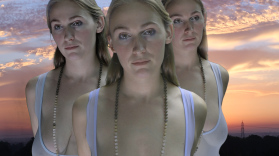 It is Sunday April 6th, in the year MMXI.

Cindy Kiss reads the news after the events of last night. “This is Cindy Kiss, this is the West Anglia Saxon News, this is Cantabrigia, here are the headlines,” she intones before telling the avid public about the arson attack in Beccleswade yesterday evening, the forthcoming crisis talks by THREE ministers in Roma about the Beccleswade sprouts embargo, and what the Liberal Democrats think about Boris.

Charlie enters Molloy’s office and tells him that there is bad news and then more bad news. “Which more bad news to you want to hear first?” At first, Molloy thinks that Charlie’s date with his sister-in-law hadn’t gone well, but Charlie puts him at his ease on that score before revealing that pathology have confirmed the disco virus in the young man who died on Friday night, plus the awful news that the Sons of Parnassus have struck again in Beccleswade for the second time this year.

Crash Helmet, Toque and Natasha re having a lie in after the exhausting events of last night. Natasha is out for the count, and Crash Helmet takes the opportunity to

come on to Toque. Toque is not impressed but goes along with some petting in order not to break cover. She does however curse Molloy for getting her into this predicament, and threatens to get revenge on both Brains and Molloy in due course.

Madame Griselda enters a cafe and the waitress serves her tea. She appear to be talking to someone but we see nobody there, although there could, just maybe, be someone off camera.

Elaine Hudson had previously watched Loose Lucy’s Hook Buddy profile but now we see the full footage with the irrepressible Cindy Kiss leading the video interview. Cindy has no allusions as to Lucy’s profession, but sees a good opportunity to promote her perfume, Cindy Kiss by Cindy Kiss, to a wider audience.

Madame Griselda is at home in her bedroom and apparently talking to someone on her mobile. After some small talk about the stars, destiny, and the tarau, she tells her mystery suitor that she is up for anything on the first date, even before the first date, she is not shy on the telephone. But there is a gnawing doubt that there is no one on the other end of the line.

Crash Helmet was not satisfied with his earlier fumbling, and the molester now violates Toque. Afterwards, he says casually that he has never felt so exhilarated, that Toque did great on the raid last night, and that they should go for a beer.

Seeking shelter after a violent storm, Willow Wilkinson arrives at the house where the Sons of Parnassus hang out. Toque is now the only member of the activist group present and still distraught from what happened earlier. Nevertheless, there is an immediate attraction between the two young women, and they nestle down in Toque’s bed, only to be discovered by Tipper as he arrives unexpectedly.

Ursula of the line Ursaa visits the reading room of Madame Griselda for a tarau  session. Ursula says that she has not been in town long, and that she is seeking enlightenment, advice, and guidance in matters that her preoccupying her. Madame Griselda seems to have a deep understanding that Ursula has come here from afar on a journey, a noble quest, and that what she is seeking is here. Ursula takes that to mean in this actual room, and she may not be wrong, but she suddenly becomes impatient and leaves the room, to the consternation of the seer.

In the WASN news room, things are very busy, and the full complement of actors are in small groups speculating, gossiping, and generally keeping the public’s lust for rolling news assuaged.

Cindy is having a hair piece fitted by Gosia, one of the interns, whilst Isabella and Laura look on. They are all talking about their respective tastes in men. Tariq seems to have gone missing at the moment and Isabella says that he is probably not happy about Hook Buddy. Cindy questions Isabella’s taste in less than salubrious partners. Isabella likes hairy tarmac pavers, and poachers, the dirtier and smellier the better.

Justin Vennegoor, the studio boss is talking with his personal assistant Clothilda, and despite last night’s events, Justin wants something else to happen, desperately seeking new stories, and more importantly more money. Clothilda has been in touch with Molloy, who just might be on Justin’s payroll, but nothing seems to be happening on that front.

Three of the make-up girls are deep in discussion. Rosalind Sharp-Wyatt, who we have met before, is surrounded by Tallulah and Suzie, and they trill on about smoky eyes and other esoteric topics of conversation. Tallulah says cryptically that an elemental never forgets.

Dave Prentice, the cameraman who filmed Laura’s Hook Buddy profile in episode 1, has decide to give Hook Buddy a go. Damien says that it’s becoming very popular and that Rosalind’s with a different bloke every night. The newsreader Michael Magee stresses that she should have a warning tattooed on her mound of venus - Nec Plus Ultra -  beware those who venture further. Damien adds - New Plus Ultra - the pinnacles of montes veneris. Dave maintains that Isabella reckons he’ll get a lot of takers on Hook Buddy, but Michael warns that it could a lot of fakers, maybe even a faker’s dozen.

Ursula is once again in Madame Griselda’s sitting room, but she is now dressed differently from before. She is looking at a sepia portrait on the wall behind where the diviner usually sits. Madame Griselda comes into the room and surprises her. The conversation eerily parallels that of the previous meeting, until a perplexed Ursula states that the tarau card reader is not a lizard, neither is she humankind. Madame Griselda is discombobulated as Ursula rises to leave - she has forgotten to take the payment in advance. As the seer screams, there is a vibration in the room and the tarau pack explodes sending the cards flying around the room. Ursula is now seated once again, and clearly orchestrating the mayhem.

Guenever Cameliard, earth nymph, dryad, reveals her back story, and the history of the elementals, once again speculating whether there are four, or in fact seven. Earth, air, fire and water play a large part as the story unfolds, but if there are seven, who are the others? Guenever is also very clear in this monologue, the harm that humankind has done to the planet overs the ages.

Beth quizzes Elektra about Lizabet Goodfellow. Elektra tells her that the essence of Lizabet was formed four billion years ago, one of seven sisters, and that she acquired the name when she transmuted into the element water. Beth says that she seems very familiar and Elektra tells her that she was probably dream fucked by her earlier in her life, probably when she was still a virgin. Elektra reiterates the harm that mankind has done to the planet, and that the powers of the elementals are now diminished. Beth asks how to get in touch with Lizabet, and Elektra reveals the existence of a secret web site, the Naiad and Dryad Zone. Finally, Beth asks naively how to have safe sex with a water nymph.

Lizabet Goodfellow, water nymph, naiad, is in a night club. She sprinkles some powder into the wine glass of a poor, unsuspecting virgin girl.

In the WASN news room, Suzie asks why Tallulah said earlier, an elemental never forgets. Rosalind agrees that Tallulah seems to have her own secret language, and asks why she is always calling Susan Constant a smouldering volcano. Then suddenly, they noticed that the waste paper bin is on fire.

Madame Griselda is in her bedroom once again, and is in her laptop messaging the person she was apparently on the phone too earlier. She doesn’t seem to be phased by the incident with Ursula earlier. Again the talk is esoteric, with mention of wands, almanacs, cosmic import and chairs lines, however Madame Griselda sees this just a prelude to telephone sex. Which of course, she is happy to abide. But then comes a knock on the door.

In the NEWS room again, Dave, Damien and Michael discuss the events of a few years back, when Rosalind and Elaine were at HeartThrob on a night when one of the earlier nightclub deaths took place. Michael maintains that they didn’t in fact witness anything, but claimed to do so to have their fifteen minutes of fame. Dave is still preoccupied with what a montes veneris is, and wonders if it’s something to do with rock climbing.

Meanwhile, Isabella is still going on about how Hook Buddy is a license to print money, and that she did Laura’s profile on the house as a big thank you for her editing skills. Laura says the profile has been very successful, apart from the plethora of dick pics, and that she is meeting someone down at The Poacher’s this very evening.

Back at the nightclub, the young virgin girl has succumbed to whatever was put into her drink. Disturbingly, Lizabet communes with her and seems to suck the life-force out of the unfortunate young creature.