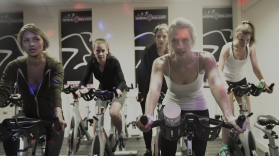 The aliens at the spin session

It is Friday April 4th, in the year MMIX, two years before the current timeline.

The Earth Child is seen trapped inside her suburban home. She lets out an eerie cackle.

Jocelyne Porter is taking to her telephone fuck buddy David and questions why she cannot meet him for real. She claims that he only seems to be interested in regular telephone sex, and when he admits it, she tells him to frack off.

We fast forward to the present day in MMXI.

Things seldom change, and similarly, Beth is not having any more joy with her telephone fuck buddy Christopher Renshaw. He claims that work is preventing his meeting up with her ‘for real’, and she like Jocelyne is immensely frustrated at the lack of physical contact, albeit privately grateful for any contact at all.

Rebekkah Wood is lying on her bed, bound with green rope. January Simpson tells Rebekkah that this is because she has crossed her. January talks to Rebekkah about the dead Porter cousins, and insinuates that Rebekkah too is a Porter.

Danny Dewell is having his third interrogation with Molloy and the dangerous Jonathan. It is clear that the torture is continuing, and his face and fingernails (and maybe other parts of his body) are now being broken systematically.  Molloy loses the plot during questioning - “you will recall that on that day, the Buns of the Bosphorus burnt down a bugger bar at Belinus Sinus” - and continually has to be corrected by Jonathan. The policemen are also putting pressure on Erasmus Sykes, another local business known to Danny, and Danny now realises that Molloy is arresting people at random for reasons best known to himself.

The young Elissa Lawrence is sitting on her bed. She bears an uncanny resemblance to the Earth Child. She is asking Elektra, her voice activated assistant, about being bullied, and about not having friends.

Meanwhile, Fay Huntley is walking through the town when she runs into January (who she was having a row with at the nightclub last night).  The two get into a scuffle although it is more like handbags at seven paces.

January gets the better of Fay, and continues her bullying of the bound Rebekkah.

Toque is in the living room of the house where the Sons of Parnassus hide away. She is with Crash Helmet and Natasha. She addresses Crash Helmet by his real name Godfrey and asks why they are so-called. The reply is that he doesn’t know. Natasha suggests that they should be called the Daughters of Parnassus.

Elissa continues her grilling of Elektra, wanting to know why she doesn’t get any likes on her Placebook page. Elektra philosophises whether they both actually exist. Elissa says “well you’d better exist, or my mother’s just wasted seventy Denarii.”

Elissa starts to drill down on Elektra and a discussion ensues about the Gallian philosopher Rene Descartes, and his famous epithet - je pense donc je suis [cogito ergo sum]. Elektra says that Descartes said this at the time that Sarah Constant was coming into the world.

“Elektra, do you ever doubt yourself?” “I’m a voice activated assistant, why would I ever doubt myself.”

January has her recurring bad dream. “why did the child have to scream like that?”

Venus of the line Vannus is taking a bath and luxuriating in her new body. Wanda comes in and questions her about her new humankind friend. “You know the risks involved.”

Xaviera and the other aliens are in a spin session in the gym, alongside a number of humankind.  Tabetha of the line Tar can’t keep her eyes (nor her hands) off a cute little human, Alex Ormond. Xaviera recognises that one of the alien group is missing, and the others try to stick up for Venus.

But now Venus has met up with her earth girlfriend Alice Harvey, and as they walk down the zigzag path, they decide to refrain from going clubbing tonight. They discuss what they are going to wear as and when they stay in and enjoy a take away, and a couple of bottles of rose wine.

Elissa now asks Elektra about elementals, what they are, and how many are there?

“Actually there are seven,” claims the voice activated assistant but she insists on only naming four of them. However she adds cryptically:

Toque catches Natasha in the hallway, and asks her if Brains has ever come on to her. “I don’t fuck men with crash helmets on. He even wears it in the bath, which isn’t very often.” Toque and Natasha look at each other in a meaningful way as they cherish this brief moment away from their fellow activists.

Venus tells Alice that she is under a lot of pressure at the moment, and asks her if she wouldn’t mind finding a hotel somewhere, and laying low for a while. “Take me to the stars,” sings Alice.

Natasha is now in the living room with Crash Helmet and they talk about what made them join the cause. “My dad, I think. He railed against injustices since as long as I can remember.  I can’t understand people who go through life without thinking of things, without reacting.” Emboldened by this intimate chat, Crash Helmet makes a clumsy pass which Natasha rejects.

Elissa tries to trick Elektra into answering some awkward questions. Elissa’s mum enters room and asks who Elissa is talking to. Elissa makes up a name Eugenie, but Elektra tells mum that she is a figment of her daughter’s imagination. “Shut up Elektra or I’ll take your batteries out.” Mum gives Elissa her medicine, and she immediately transforms into the Earth Child.

Cindy Kiss sits on the toilet and rings her dentist, claiming that she has a tooth growing in the roof of her mouth.

Crash Helmet and Natasha continue their discussion, beginning to plan their next outrage. Brains says that they mustn’t get too complacent, they've done well up to now but they’ve been lucky, thank The Ley.

January is on her bed with her laptop, continuing to bully the teenagers. This time it’s Esme’s turn.

Toque meets Molloy at the reservoir again. Toque tells her boss that there’s been some activity at the house. Molloy suggests that there might be value in Toque getting closer to one of the other activists, presumably one of the males. “Pillow talk is often the only answer.” Toque is upset and angry about this stating that Molloy had promised from the start that there would be no need for anything like this. “It was only a thought,” says Molloy.

Venus and Alice are sitting on the four-poster bed in their new-found hotel. Things are strained between the two of them. Venus expresses her deep love and Alice responds by moving closer. But Venus draws back, and Alice doesn’t understand why.

Molloy is back at the police station and talking with Jonathan and Charlie about the frustrations of not being able to catch the Sons of Parnassus in action, despite having D.S.Banks under cover.

Beth is once again on the telephone with Christopher, but her disappointment is palpable.

Toque has returned to the house after seeing Molloy at the reservoir, and she encounters Natasha in the hallway again. It’s the time of the month for both of them. They talk about they both got mixed up with the cause, echoing both Natasha’s earlier discussion with Crash Helmet, and Natasha’s brief moment of intimacy with Toque earlier.

It’s Friday night at the HeartThrob nightclub in St.Evenage. The dance floor is animated, and already Tabetha and Alex are whispering sweet nothings as the evening gets underway.  Alex goes to the bathroom to freshen up but Tabetha follows her in and takes her into one of the cubicles.

Fifteen minutes later, still in the bathroom, Tabetha is talking with Ursula and Wanda where they are discussing tactics for the night. Ursula is forthright that they need to get at least thirty samples that evening, and tells Wanda that Venus has let them down badly. She adds that if an analysis comes up positive, not to let them go dead or alive.

Xaviera enters on her mobile and says that she is not happy about Venus’s absence. She returns to the dance floor where a young man has just bought drinks for her and Wanda. He is very nervous and drops his change on the floor. Xaviera takes him outside to the stairwell where he makes a clumsy pass. She says a few strange things, and then suddenly transforms into her true alien self, just milliseconds before the poor boy expires.

She storms away angrily as he slumps to the ground.