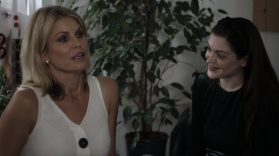 It is Thursday April 3rd, in the year MMIX, two years before the current timeline

Christine and Caitlyn, still poor and still single, are playing draughts, and still bemoaning the fact that their hopes and dreams are coming to nought. “It would be a shame to die without having achieved anything,” opines Caitlyn.

Cindy and a young Laura Dark are in the TV studio and talking about Cindy and Isabella’s new venture, the nascent Hook Buddy.

Lauren’s mum Jocelyne has already been onto the dating site and met up with  a guy called David. She’s been on her own for a while same this is very promising.

In the kitchen Lauren and her older sister Esme are having a fight. Lauren has been asked out on a date by Wayne who has a reputation as a player, and Esme just knows what is likely to happen. Lauren just wants to go to a rock concert and maintains that she’ll be alright.

D.C.I.Molloy and D.S Charlie Dawkins discuss trying to put one of their officers in under cover to the Sons of Parnassus. Molloy is very frustrated that they haven’t managed to catch the shadowy group in the act, same to speak, after thirty-four arson attacks on fast food joints in West Anglia Saxony. Charlie offers his services but Molloy says that D.S.Angel Banks would be the better choice.

Cindy continues to goad a reticent Laura into getting a Hook Buddy profile. “they’ll be queuing up for a good looking girl like you Laura.”

Esme and Lauren have made up now and are sitting on Lauren’s bed musing about life and anxiety.

Two ghost-like heads, calling themselves Xaviera and Venus, discuss a mission that they are about to embark on. One says to the other that they should make it quick in order to avoid unnecessary suffering. They descend on Christine and Caitlyn, and take over their bodies. Xaviera of the line Xin Xin, now incorporated into the body of Christine, says that they have places to visit, work to do, people to see.

Esme and Lauren continue their discussion, now focussing on ‘the one’. Is there such a thing and will either of them find it?

Cindy has actually done a Hook Buddy profile of her own - to show people how it should be done. She did think better than asking Isabella, so she got Isabella’s assistant Rosie Cru to do it.

Molloy and Charlie continue their discussion about the Sons of Parnassus and decide to bring some random people in for questioning. Charlie asks Molloy if it’s strictly legal to torture people and Molloy replies “why ever not? We’re here to serve the public.”

Jocelyne is a bag of nerves after crashing her car, and rings Esme for solace.

Cindy comes into the editing room, and Laura notices that her cheeks are glowing. Cindy doesn’t try to deflect about what she’s just been up to, and with whom.

Jocelyne and Lauren continue their heart to heart. They told about putting flowers onto the graves of Lauren’s dead cousins Clare and Louise. Louise was killed in a car crash after being driven to a rock concert with Wayne, and Jocelyne implores her daughter not to follow suit.

The action moves forward to the present day, MMXI.

Meanwhile Esme arrives at her friend Lottie’s house, or to be more accurate Winston and Mrs Molloy’s house. Lottie’s mum Carol, who we have already met, is Mrs Molloy’s younger sister, and the Molloy's are putting Carol and Lottie up after a disastrous and abusive relationships with one of Molloy’s policemen. Lottie has found a book belonging to her grandfather which talks about humans, lizards, and the other side. Esme is not so convinced.

Tonight we are all in The Pampered Panther again. Lauren has gone along with her best friend Cynthia Longfellow, and they watch as their friends get increasingly drunk. One of them, Willow Wilkinson is legless, and throws up in the toilet.

The club manager, Fay Huntley has already had words with one of Esme’s friends, January Simpson, who she suspects of drug taking, and almost certainly dealing, but now Fay is sympathetic to Willow’s plight, and looks after her after everyone else has gone home.

Finally, we see Rebekkah Wood, another cousin of Esme and Lauren, and it is evident, same January tells us in the voice over, that she is being violated by her own brother, Willy Porter who is high on drink and drugs.

There are quite a few ‘persona non grata’ in this episode.