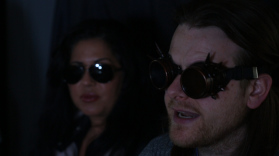 Natasha and Tipper played by Samiha Foustok and Adam French

It is still Saturday April 5th, in the year MMXI.

Trish and Carol are on the phone discussing what Carol is thinking of wearing for her date with Charlie. Trish says that a little black dress always works, the shorter the better. Carol confides that she did fancy Charlie the first time she saw him but she was with Bruce at the time. Trish reckons that Carol is not going to play the shy card on the first date.

Meanwhile Charlie and Jonathan are discussing method.  Charlie maintains that Jonathan has only one string to his bow, but Jonathan counters that his methods are better than his colleagues’ methods any day. The discussion comes to an end just as Molloy calls them into his office.

Lottie wonders whether her mum is planning on having sex on the first date. Carol, wearing a little red dress, is putting on red lipstick as Lottie and Esme quiz her about the plans for the evening. Carol says that it would be good to talk but the girls aren’t convinced. As Carol leaves the Molloy living room, the two girls start a cushion fight, giggling uncontrollably.

Crash Helmet and Natasha are talking about revolution. They discuss the absent members one by one. Natasha thinks that Tipper is a bit stupid but he does as he’s told, that Ivan’s competent if not a little hot-headed, and that Toque has been a good addition to the team. Crash Helmet reveals that he is not so sure about Toque, and then wonders where she gets her name from. Natasha says that it’s because of what she wears on her head.

Elaine Hudson is in the WASN editing room putting the latest Hook Buddy video profile onto the server. The new members is an attractive woman of a certain age although just like Carol and Trish she states that she is just thirty years old. Cindy follows the usual questions and Lucy Lammermoor - you can call me Loose Lucy - says that she has a very warm feeling about the dating site. Cindy has a feeling that Lucy is , shall we say, a professional, but doesn't really care as long as she makes lots of profit from the site. Elaine smiles as she watches the video, and she seems to be texting someone, probably Rosalind.

Venus and Alice are still in their hotel room, proclaiming their love for one another. Alice is still unsure why Venus is shying away from a physical relationship. She has no idea about Venus’s background, never mind who she really is.

Elaine is on the phone now to Rosalind, and tells her that something happened on the way home from The Pampered Panther on Thursday without being more explicit. She calls a rain check on tonight’s planned visit, but wishes Rosalind good luck in her irrepressible quest for the male of the species.

Charlie drives up to the Molloy household to pick up Carol, and Carol slopes out of the front door furtively in case someone is watching. This suits Charlie who doesn’t want Mrs Molloy, in his words, faffing around.

Natasha tells Crash Helmet that she is prepared to do anything for the cause, but wonders where all of this is going to lead. What is going to be the end game? Brains says that there doesn’t have to be an end game, that they should continue to burn down the cathedrals of injustice and put the fear of The Ley into the oppressed. Natasha says that they should hit Beccleswade again, hit them where it hurts. That’s more like it says Brains, there’s a beautiful symmetry to that, a delicious irony. “I love it when you talk like that, Beccleswade it is,” says the female activist.

Venus asks Alice how many girlfriends, or boyfriends, she has had. Alice doesn’t tell the entire truth in her reply, but ask Venus the same question. Venus says that she has had a sheltered upbringing, and the Alice calls her a poor lamb. Then Venus says something very weird. “Why did you call me a lamb. Because I’m not a lamb, I’m a humankind.” Alice laughs a nervous laugh with no trace of irony.

Crash Helmet warns against complacency as the five activists assemble once again. Natasha still wants to hijack an airliner and crash it into the THREE building,   wreak havoc on the complacency of the middle classes, strike a blow  for                 the  downtrodden peasants on the steppes. “There’s only so many times you can burn down burger bars and effect social change.” Tipper can’t remember whether they’ve done thirty-five or thirty-six arson attacks so far, and says that he doesn’t like risk. Ivan scorns the idea of the tent outside the Basilica, and says that he’s rather kidnap the Tsarina and torture her. Toque still thinks that should free the animals from the zoo, like in that film, but Natasha says that that could lose them a lot of public support for their cause. Ivan advises caution, and wonders what might happen if they got caught.

Charlie and Carol are at the Manchurian and Carol is enjoying herself immensely. Charlie says that he loves her fragrance and correctly identifies it as Cindy Kiss by Cindy Kiss. Carol is impressed, and tells Charlie that this is the best date she’s been on for a long time. “What made you ask me out?”

Lauren is with Cynthia again on the phone. She has just washed her hair and wants to start planning for tonight’s visit to The Pampered Panther. But Cynthia reveals that there is a change of plan - she’s going to be spending the night with Wayne. Remember Wayne. Lauren is bitterly disappointed but is already thinking of going on her own.

Charlie and Carol are outside the Molloy’s now, and Carol has just one thing on her mind, offering him a ‘special’ kiss. Charlie is not so eager however and says he needs to get back for an early night. Carol is not happy and slams the door as she gets out of the car.

Lauren has made her way to The Panther, on her own. She paces up and down outside the nightclub on her mobile, but someone is watching her. It just might be January Simpson.

Inside a small back room at the nightclub, January is dealing drugs and is in the process of dosing Sofia Mbewe with little blue pills, as two other girls come in for lines of coke. Lauren has just been to the toilet when she is confronted by Fay Huntley, the manager of the club, who searches her clutch bag. Finding nothing but some tampons and an ID from Lauren’s late cousin Clare, she tells Lauren that she can live with the fake ID, that Lauren can drink till she throws up, and fuck as many boys and girls as she wants. But she will not tolerate drugs within the club.

January is counting her money in the back room when Fay comes in and confronts he about the drug dealing. January tells Fay that it is none of her business, Fay replies that is every bit her business, and a row ensues.

Meanwhile Lauren is watching some of the nightclub punters snorting coke, and as they leave January comes in and starts to have a go at Lauren. It looks like Lauren has come in to score but January will not allow it. “There are enough dead Porters in the world already.”

Crash Helmet starts to brief the crew about the imminent arson attack stating that it will take place next Saturday, and that tonight will be a trial run. But remember he is the Brains of the outfit, and his plan is actually to go live  tonight, before any of them take the opportunity to go missing in action. The plan is executed flawlessly and the conflagration is impressive, even by the standards of The Sons of bloody Parnassus.