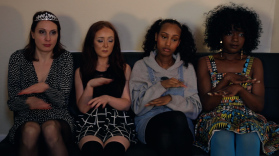 Have you seen the stars tonight (it isn’t a question)

It is Wednesday April 2nd, in the year MMXI.

A character is signing in what appears to be a prison cell.

It is dark and it seems that some poor soul is being attacked in the street while his assailants muse about flying saucers, and whether there is intelligent life in the universe.

Meanwhile three plains clothes policemen discuss the man that they have just taken in for torture.

Beth Constant, a young Beccleswade woman asks her voice activated assistant what the constitution of rain is, and why it is always raining in Verulamium Way.

Beth remembers a dream that she once had, skipping through the maythorn, communing with a satyr in the forest, waiting with three sissy girls for midnight to approach. It doesn’t end well.

A young woman, wearing a toque, has an assignation with the senior policeman at a burned-out building shell. He is not pleased.

Laura Dark, a young editor at the WASN television studio is being interviewed by the glamorous newsreader Cindy Kiss for a profile on the new adult dating site Hook Buddy.

Danny Dewell, the poor soul who was being attacked at the beginning of the episode is now being grilled by the hapless senior policeman, D.C.I.Winston Molloy, and his unsavoury associate D.S.Jonathan Kilby.

The Magician tells us that we have gone back to the year 1667. A girl called Sarah Constant is telling her lover Alexis that she is ‘quick with child’. The Magician tells us that in the intervening years since this bloodline began, each child begat others and it is estimated that there are now four hundred descendants of Alexis of the line AA living in West Anglia Saxony.

Beth asks the voice activated assistant Elektra how she might meet a man. Elektra tells her that Hook Buddy is a good dating site although other sites are available.

Toque meets Molloy again, this time at the reservoir. We learn about the Sons of Parnassus, a shadowy group that Toque has managed to infiltrate.

Cindy Kiss has started the Hook Buddy website with her associate newsreader Isabella Karlin. Now it is Isabella’s turn to do the video profile of Carol Claxton, a Beccleswade single mum, who coincidentally is Molloy’s sister-in-law.

Lauren Porter, a young Beccleswade girl is watching something she shouldn’t on her laptop. Her mum Jocelyne hears the passionate moaning, and decides it’s time for a heart to heart chat with her daughter.

Elaine Hudson, a make-up girls at the WASN TV studio, tells us how she likes to spend time in nightclubs, especially HeartThrob in St.Evenage and The Pampered Panther in Cantabrigia. Her best friend Rosalind is equally promiscuous and they decide that The Panther is their preferred option this evening.

But it’s The Pampered Panther tonight, and Christine and Caitlyn won’t be there. It’s generally a dull night except for Rosalind getting a talking to by a prostitute for selling herself too cheap, and then being attacked by another prostitute who just doesn’t like the look of her.

Same Elaine, ever the optimist, stays at the club on her own. But when she leaves alone at 4 AM, and fails to get a lift home, she is attacked and violated. The evening didn’t go to plan.